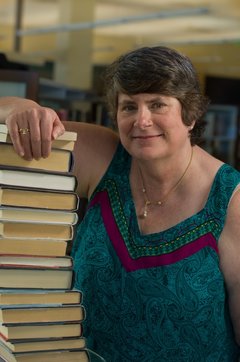 Author Susan Carroll began her career in 1986, writing historical romance and regencies, two of which were honored by Romance Writers  of America with the RITA award.  She has written twenty six novels to date.   Her St. Leger series received much acclaim. The Bride Finder was honored with a RITA for Best Paranormal Romance in 1999 and also received the Reviewers Choice Award from Romantic Times magazine for Historical Romance of the year.  Two sequels followed,The Night Drifter and Midnight Bride.

Ms. Carroll launched a new series with the publication of The Dark Queen, The Courtesan, The Silver Rose, The Huntress, Twilight of a Queen  and Lady of Secrets all set during the turbulent days of the French Renaissance. A blend of history, romance and intrigue, these books relate the saga of the Cheney sisters, three women of extraordinary abilities who live in constant peril of being accused of witchcraft.  The novels combine fictional characters with real events and personages such as the enigmatic Catherine de Medici, the lusty Henry of Navarre and the dynamic Elizabeth I of England.

Ms. Carroll was born in Latrobe, Pa.  She spent much of her childhood in South Jersey where she graduated from Oakcrest High  School in Mays Landing.  She attended college at Indiana University of Pennsylvania, where she received a B.A. in English with a minor in history.  She currently resides in Illinois.